Huffing for the Win! 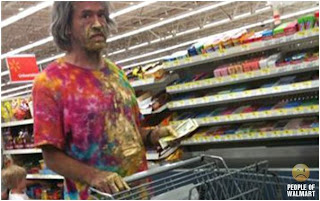 Spray paints, aren't they just the greatest! Not only can you get exceedingly high, and die, you can also spray your models with it! So I bought myself 2 cans of Army Painters Dragon Red. This was quite expensive, but whoa was it worth it!

Other than some dramas with the undercoat (I'll get to that soon), it was really damn good! 30 minutes or so and we had all this stuff painted and ready to go. The downside was the undercoat. I thought id be fine popping down the the local auto shop and just buy some cheap undercoat spray. In theory this is not a bad idea, in practice it was a pain in the arse! Some models came out alright, others just lost all detail and had to be stripped.

My friend ended up buying some Tamiya undercoat. It coast me like $28 for a 100ml and 190ml sprays, but we managed to base coat all those models with those 2 cans. While i was thinking, hey, it only costs me $12 for this big arse can. It ended up being a $12 waste of time! 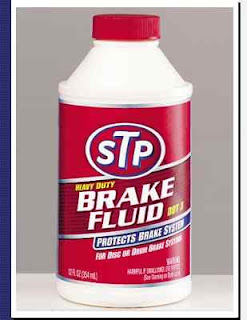 Next on the agenda was stripping models. I have used good old brake oil in the past and didn't have too much problems with it. If you have very thin plastic I probably wouldn't use it but it worked fine with my Khorne Bersekers. I tried the Dettol and it was a pain in the arse! Messy, stinky masty shit that has made my work area stink like dettol for days!
Posted by Diggler at 11:20 PM 5 comments:

Get Up, Get On Your Feet!

My good friend, and avid gaming nut has been forcing me to take control of my out of control and completely ignored Chaos Army. He has told me thats it's time to dump the ultra boring black/gold of Black Legion and instead go for a more vibrant Red/Black combo of the Red Corsairs. 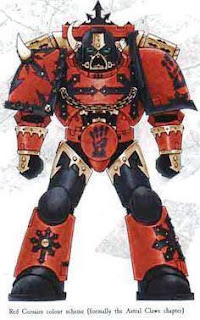 The idea is to go for this design, with slight variants from one sqaud to the next. Like you could have one squad with a shoulder pad painted all black (like Space Marines) and other variants between squads. We have also looked at cutting the fins off the back packs and also printing off some very cool Red Corsairs logo sheet from here.

All I need now is just to time and inclination to get off my lazy arse and do this?
Posted by Diggler at 2:52 AM 4 comments: 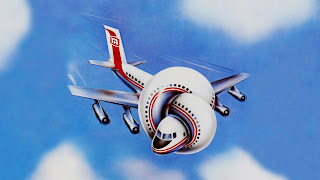 Since the advent of 6th edition, and the new Chaos Space Marine codex, flying items have become quite cool for CSM. We finally got a vehicle in the form of the Helldrake, with it's Vector Strike and the ability to shoot as it a pivotal weapons (Hell Yeah!). Deamon Princes unluckily got a bit of a nerf in stuff like Smash (round down attacks for double penetration vs vehicles), no more Eternal Warrior (deamon weapon kill sticks me) and no more Lash of Submission (NOOOOOOO).

But we do gain some extremely cool things! we get flying! With flying you get to do move up to 24 Inches above everything raining down Vector Strikes (D3 + 1 S6 AP3 hits). If you wish to ramp up the odds, take out your CC and put on Burning Brand of Skalathrax for some S4 AP3 template action up to 23 Inches from your base with Torrent (base of template within 12 Inches of model).

Or another alternative is to keep the above setup then run Tier 3 Psychic Powers on Tzeentch and unleash merry psychic hell on your enemy as well. You'll also get to re-roll 1S on your armour save table. Like most people are going to care seeing it's going to take 6S to hit while your flying!

So you've have an extremely expensive (350 Points with Armour, Gift of Mutation and Spell Familiar), though hell of a lot more versatile Helldrake that start at the beginning of the game!
Posted by Diggler at 11:55 PM 3 comments:

Well it's been nearly 2 months working on this model, and it looks like shit! That doesn't matter, as I really had no intentions of it ever looking anything half decent. What it has been is a fun exercise that has gotten my interest back into painting.

I've learnt a lot of things while doing this, tried some ideas I've never bothered with before. If you're an amateur painter, don't lose heart with your paint jobs. Just take all jobs (good and bad) as a learning experience. If your enjoying your painting, then just take is a fun leisure time... 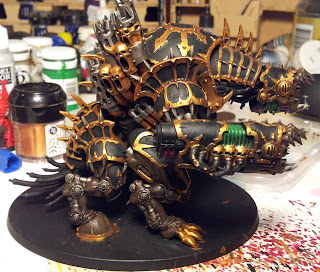 Next on the agenda will probably be my Warp Talons. This are going to be hard, as it will involve Black, Gold and that's about it! When I first tried them I really had no luck with them, but now I have a possible solution which I'm going to try out on Sunday.... Hopefully it works!

How the Hell do I paint that!

The one thing that I've noticed with model painting as of late is fiddly bits. I'm usually of the view that you build the model then paint it it after assembling. It seems like most people on the video's do it that way. But I'm starting to wonder if it's maybe not such a bad idea to partially build bits, paint them, then finish assembling? 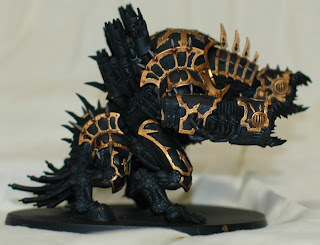 My Forgefiend's legs have been a real issue for the nefarious fiddly bits. It's felling like the Kama-Sutra of painting, due to having to use Yoga level finger and wrist movements! As for the model it's coming along pretty well. So far it's just involved Gold, followed with some Gold, and rounding of with yet more Gold... Then washing down with Devlan Mud. While I constantly complain about GW's products, Devlan Mud is great! Now for the whinge! I've heard they've got rid of Devlan Mud for some inferior garbage called Agrax Eartshade. Why on earth they would choose to get rid of it, I don't know? But when it comes to Games Workshop the whole company seems to work on the "I Don't Know" logic. Ahh well, hopefully Vallejo's range of Shades might fill the gap. 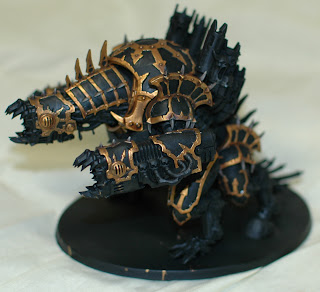 The camera is doing not so bad. Though I'm having problems getting to to focus on the whole model rather than specific parts. Unlike the crappy camera phone (it's not so bad, the brushes were taken on it), it doesn't like macro. Though at a resolution of 3008x2000 you don't really need to get close.

I've talked about this before, but I though I'll mention it again. Brushes. Nothing helps with painting that a good brush! I first started by buying these cheapie things from the local hobby shop for $1.00 each when i first started painting. The were usually made of Taklon and honestly are pure crap! After 2 hours of use these things would end up being on a sideways angle and spreading out. Which is useless for high detail areas. While Taklon may great for doing make-up, dry brushing and large area's. they are not so great for fiddly work. My advice is use to buy Kolinsky brushes. 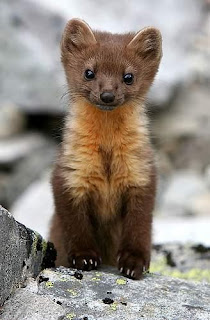 Your probably wondering what this cool little creature is doing on a model page, well I will explain. This cute little darling is a Kolinsky, a Siberian Weasel. The males tale hairs, make some of the best damn brushes you can possibly buy! While I really disagree with the idea of something dying to make a brush, this are damn fine brushes, and if you look after them (don't use them to apply glue or dry brushing of course) than can last you for years and years!

While most people believe Windsor & Newton Number 7 is deemed as the ducks nuts of brushes. I've never used a W&N brush, but here they here I'll need to make out another morgate on the house to buy one! I have some slightly cheaper alternatives though.

Escoda Kolinsky Tamjir. This are probably my favourite brush at the moment. It was also nicely priced at around $15 for the 001 that I bought.

Privateer Press Fine Hobby Brush. As far as brushes go, this was CHEAP (under $10). It's only a small brush which is good for small areas, not so great for large areas though. 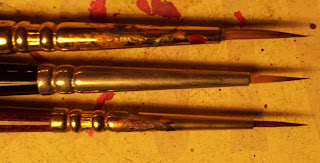 The top brush and the bottom are Escoda. These are my most used brushes and they still look really good! The one in the middle is the P3 brush. Yet again has got quite a lot of use, and still looks fantastic!
Posted by Diggler at 10:53 PM 2 comments:

The Man Cave from Hell

Nothing is more important to the average middle aged guy as the beloved Man Cave. It is up there with having to take control of all the remotes! 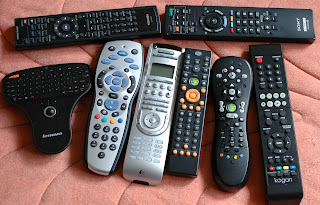 Now my man cave is a bit of a shambles. We have 6 people living in the house here, because rent is damned expensive in Australia. So It's just a tiny little hole, in the corner of the shed, which is overgrowing with assorted crap that I just pile in there on a regular basis. But it does serve me well. I have a table, a relatively comfortable chair and all the other necessity's I need. 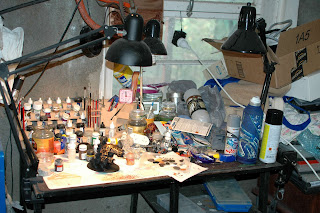 This may seem hard to believe, but this is clean! Not long back I wasn't able to get to the table with the thought of breaking a foot due to the crap piled around it. I think my point is, if you want to paint, I highly recommend building a little Man Cave. It makes it easy for you to pop down and paint at your leisure, it saves you time as you don't have to constantly pull stuff out and pack it up again and it saves your missus ripping you a new asshole for leaving crap every where!

You can also see my new goal on the table there! My kick arse forgefiend that my son bought me. I'm pretty much going for a Black Legion. It's easy for a beginner as it's only black and gold. So far I'm really enjoying it this and am hoping to not only keep on painting, but also keep on annoying people on the my blog! :) 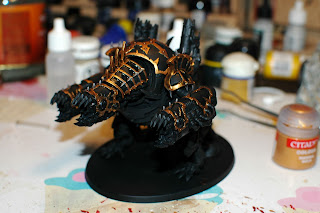 I have a DSLR now. I of course will post better pictures at another time.
Posted by Diggler at 11:53 PM No comments:

Diggler
I'm an old fart that seems to bounce from one thing to another. If I'm not painting or browsing the net, then I'm reading, watching movies or working around the house.